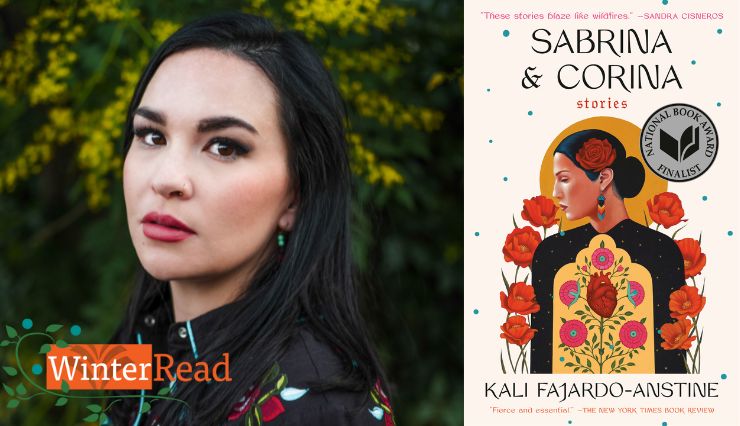 Join your local libraries for the closing of the 2023 Winter Read, featuring keynote speaker Kali Fajardo-Anstine, author and National Book Award Finalist. Her debut story collection, and this year's community read, "Sabrina & Corina," made waves in the literary community for its honest, provocative look at life in the American West for women of Latina and Indigenous descent.

Drawing from her Southern Colorado heritage and life experiences living across the American West, Fajardo-Anstine’s writing and lectures reflect her own heritage as a Colorado Chicana with roots in Indigenous, Latina, and Filipino cultures. In rousing talks that challenge the status quo, Fajardo-Anstine speaks about her racial and familial identity, the systems in our society that hold back marginalized people, and the craft of writing about and researching one’s cultural roots.

In Sabrina & Corina, Fajardo-Anstine puts Latinas of Indigenous descent living in the American West at the center of each story. Her words serve as a powerful meditation on friendships, identity, mothers and daughters, and the deep-rooted truths of our homelands. Against the remarkable backdrop of Denver, Colorado, the women in these stories navigate the land the way they navigate their lives: with caution, grace, and quiet force.

The program will be livestreamed and available to view later. Link forthcoming.

Fajardo-Anstine is also the author of the novel Woman of Light (June 2022), a dazzling epic of betrayal, love, and fate that spans five generations of an Indigenous Chicano family in the American West. Her stories and essays have appeared in GAY Magazine, The American Scholar, Boston Review, Bellevue Literary Review, Southwestern American Literature, Electric Literature, and more. Fajardo-Anstine has attended residencies at Yaddo, where she was the 2017 recipient of The LeSage-Fullilove Residency, Hedgebrook, and MacDowell Colony.

Kali Fajardo-Anstine earned her MFA from the University of Wyoming and has lived across the country, from Durango, Colorado, to Key West, Florida. She is the 2022/23 Endowed Chair of Creative Writing at Texas State University.

Registrations open at 7:00am Sunday, January 1, 2023
Browse/Search for more events