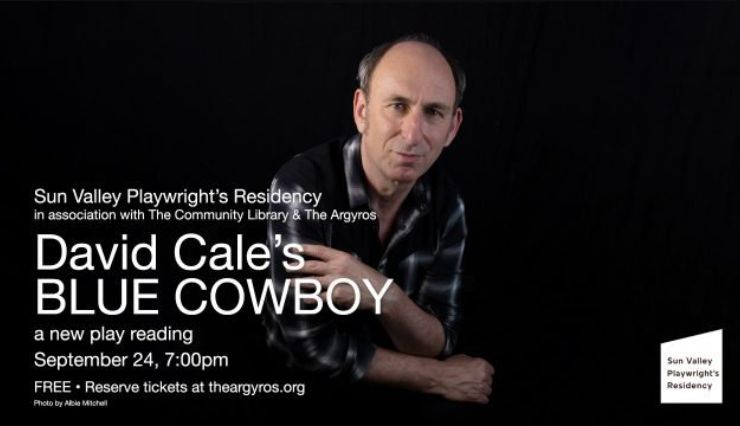 Written and performed by David Cale • Directed by Les Waters

This performance will be at The Arygros, 120 Main St South in Ketchum.

A gay writer from New York travels to Ketchum, Idaho, to work on a film script set in Sun Valley. His plans and life take a wildly unanticipated turn after he has a chance encounter with an elusive ranch hand at the town’s annual Trailing of the Sheep Festival. Blue Cowboy is the frank and sexually explicit story of two men from very different worlds. One who’s very open about his life, and the other whose life remains a self-imposed mystery to everyone around him, but who both share a profound need to intimately connect to another human being.

The inaugural recipient of the Sun Valley Playwright’s Residency, Obie Award-winning performer and playwright David Cale wrote Blue Cowboy while in residence at the Ernest & Mary Hemingway House, which is managed by The Community Library. This workshop reading is directed by Tony-nominee Les Waters, and is presented in association with The Argyros and The Community Library.

Acclaimed as “an enthralling writer-monologist” by The New York Times, David Cale’s recent shows include the solo play Harry Clarke, starring Billy Crudup, for which he received the 2018 Lucille Lortel Award for Outstanding Solo Show, and his solo musical memoir We’re Only Alive for A Short Amount of Time, for which he wrote the book, lyrics, co-composed the music with Matthew Dean Marsh, and starred. For We’re Only Alive for A Short Amount of Time, David was the recipient of the 2019 Jeff Award for Best New Musical, a 2020 Outer Critics Circle Award, 2020 Lucille Lortel Award nomination, 2020 Drama Desk Award nomination and a 2020 Obie Award. His new solo play Sandra, starring Marjan Neshat, will premiere off-Broadway in November 2022 at the Vineyard Theatre.

The inaugural recipient of the Sun Valley Playwright’s Residency, he spent a month writing Blue Cowboy at the historic Ernest and Mary Hemingway House, which is managed by The Community Library Association as a private residence for visiting writers and the site of ongoing preservation efforts.

Les Waters is a multi Obie Award-winning and Tony Award-nominated Director. He has directed twice on Broadway and multiple times Off-Broadway and in many regional theatres. He has been Head of Directing at UC San Diego Department of Theatre and Dance, Associate Artistic Director at Berkeley Repertory Theatre, and Artistic Director of Actors Theatre of Louisville. More information about his life and career can be found in The Theatre of Les Waters: More like the weather, edited by Scott T Cummings, and published by Routledge.

Sun Valley Playwright’s Residency (SVPR) is a non-profit artist retreat, commissioning program, and new play development lab based in Idaho. The mission of SVPR is to galvanize positive change within Wood River Valley’s community and beyond by giving visionary theatre artists of all backgrounds substantive time and space to focus on creating new work for the stage that produces conversations and learning opportunities locally, regionally, and nationally. Annually, SVPR provids one playwright a $10,000 commission, 13 months of individually-tailored development resources, and two months of retreat time in Ketchum, in partnership with The Community Library and The Argyros.