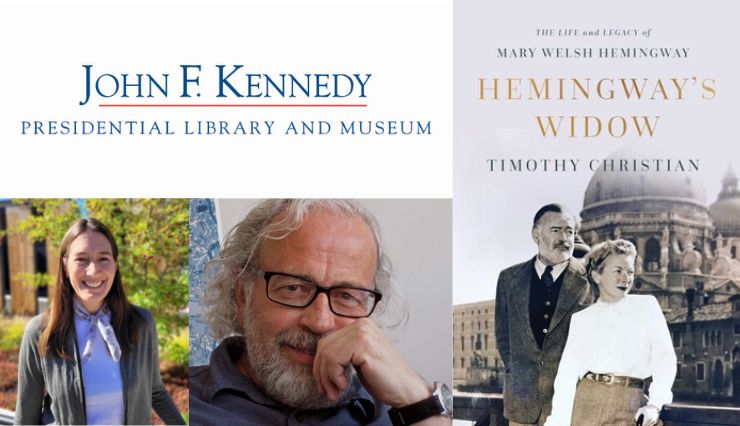 Timothy Christian, professor emeritus at the University of Alberta, discusses his new book Hemingway’s Widow: The Life and Legacy of Mary Welsh Hemingway with Jenny Emery Davidson, executive director of The Community Library.

This Kennedy Library Virtual Forum is hosted by the John F. Kennedy Presidential Library and Museum in Boston. Click here to watching the recording.

Timothy Christian graduated as a Commonwealth Scholar from King’s College, Cambridge. During a varied legal career, he served as a law professor and Dean at the Faculty of Law at the University of Alberta and a visiting professor in Japan and Taiwan. Christian read A Moveable Feast in the cafes of Aix-en-Provence when he was a young man studying French. Realizing that no one had written deeply about Mary Welsh Hemingway, Christian began researching her story–and discovered a woman vital to Hemingway’s art. Christian is married to a lawyer and abstract artist, Kathryn Dykstra, and lives in a Mediterranean microclimate on Vancouver Island’s beautiful Saanich Inlet.

About Hemingway's Widow: A stunning portrait of the complicated woman who becomes Ernest Hemingway's fourth wife, tracing her adventures before she meets Ernest, exploring the tumultuous years of their marriage, and evoking her merry widowhood as she shapes Hemingway's literary legacy.

Mary Welsh, a celebrated wartime journalist during the London Blitz and the liberation of Paris, meets Ernest Hemingway in May 1944. He becomes so infatuated with Mary that he asks her to marry him the third time they meet—although they are married to other people.  Eventually, she succumbs to Ernest's campaign, and in the last days of the war joined him at his estate in Cuba.

Through Mary's eyes, we see Ernest Hemingway in a fresh light.  Their turbulent marriage survives his cruelty and abuse, perhaps because of their sexual compatibility and her essential contribution to his writing.  She reads and types his work each day—and makes plot suggestions.  She becomes crucial to his work and he depends upon her critical reading of his work to know if he has it right.

We watch the Hemingways as they travel to the ski country of the Dolomites, commute to Harry's Bar in Venice; attend bullfights in Pamplona and Madrid; go on safari in Kenya in the thick of the Mau Mau Rebellion; and fish the blue waters of the gulf stream off Cuba in Ernest's beloved boat Pilar.  We see Ernest fall in love with a teenaged Italian countess and wonder at Mary's tolerance of the affair.

We witness Ernest's sad decline and Mary's efforts to avoid the stigma of suicide by claiming his death was an accident.  In the years following Ernest's death, Mary devotes herself to his literary legacy, negotiating with Castro to reclaim Ernest's manuscripts from Cuba, publishing one-third of his work posthumously.  She supervises Carlos Baker's biography of Ernest, sues A. E. Hotchner to try and prevent him from telling the story of Ernest's mental decline, and spends years writing her memoir in her penthouse overlooking the New York skyline.

Her story is one of an opinionated woman who smokes Camels, drinks gin, swears like a man, sings like Edith Piaf, loves passionately, and experiments with gender fluidity in her extraordinary life with Ernest.  This true story reads like a novel—and the reader will be hard pressed not to fall for Mary.