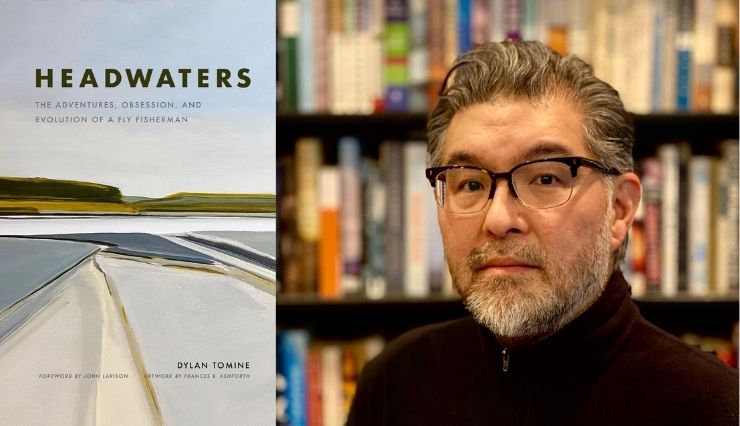 "Headwaters: The Adventures, Obsession, and Evolution of a Fly Fisherman" with Dylan Tomine and Frances Ashforth In-Person

When it comes to books about fishing, few authors capture the all-out obsession with equal parts honesty, humor and sobering dose of reality as well as Dylan Tomine in his memoir, Headwaters: The Adventures, Obsession, and Evolution of a Fly Fisherman (Patagonia 2022).

Including two decades of Tomine’s writings, Headwaters chronicles his journey to wild fish conservation. Thirty-five personal stories appear in (mostly) chronological order,  opening with a portrait of a young boy who is all too busy trying to catch steelhead to bother with baseball cards or girls. Tomine later became a self-proclaimed fish bum, working as a guide and fishing as often as possible around his home waters near Seattle. But in 2001, a wake-up call — the Spring closure of his beloved Skykomish River due a sharply declining salmon population — would change the course of his life from obsessed, couchsurfing angler to one keenly focused on the conservation of the fish and rivers that have shaped his life.

The book follows Tomine and his evolving priorities as an angler as he searches for fish and adventure in the far reaches of the planet: Christmas Island, the Russian Arctic, Argentine Patagonia, Japan, Cuba and British Columbia. In stories set closer to home, he wades deeper into his favorite steelhead rivers of the Pacific Northwest and the politics of saving them. With plenty of laughs along the way, Tomine celebrates the joy and pain of exploration, fatherhood and the comforts of home waters from a vantage point well off the beaten path.

The stories are accompanied by artist Frances Ashforth’s illustrations, which are sprinkled throughout the book. A fellow angler, Ashforth says her stark images share the memory of place and hopes they “strike a chord of deep respect for the raw elegant beauty of the landscapes we all find familiar.”

Tomine and Ashforth will join us for a free, outdoor event on the Library's Donaldson Robb Family Lawn on 4th Street. (In the case of inclement weather, this event will move indoors to the Library's Lecture Hall.) The conversation will be moderated by Jim Norton, a board member of the Idaho Conservation League.

Join us earlier in the day also for a wader testing and repair clinic with the Patagonia Fish Team.

A book signing with Chapter One will follow. *Update: this program will not be livestreamed, but it will be recorded and available to watch later.*

No registration is needed to attend in person. Bring your lawn chair or blanket!

Dylan Tomine is a father, writer, conservation advocate and recovering sink tip addict, not necessarily in that order. In addition to his conservation work, Tomine is the father of two teenage anglers, whom he raised to have his same fishing sensibilities. He covered their Bainbridge Island fishing and foraging life in his first book Closer to the Ground: An Outdoor Family’s Year on the Water, in the Woods and at the Table (Patagonia, 2012), which received coverage from the Washington Post and was a National Outdoor Book Award honorable mention. He is also a producer of the feature-length documentary, Artifishal. He lives in Bainbridge Island, Washington.

Frances Ashforth is an artist who spends her time drawing, painting and printmaking. Her work has been shown in Canada, Europe, and the U.S. in galleries and small museums. She spends a great deal of time outdoors, hiking, fly fishing, studying the land and edges of habitats.

Jim Norton has been a professional river guide and naturalist for the last 25 years. He has worked in North America, China, Chile, and New Zealand, and now primarily guides in the Grand Canyon and Central Idaho. He is active in the effort to restore rivers and pacific salmon populations, for which he has spoken from community halls to Congress.