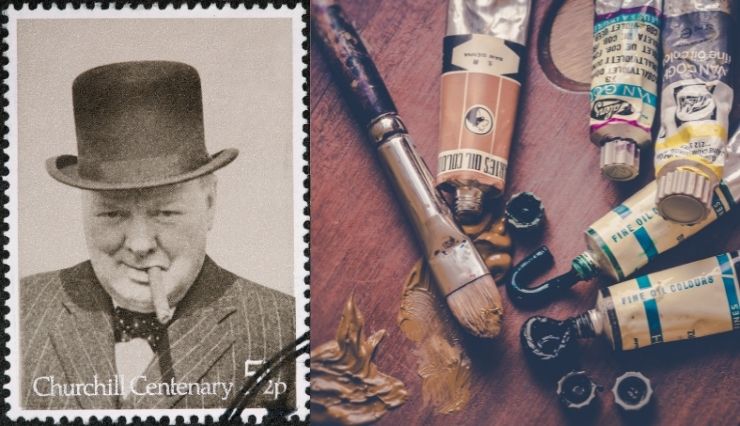 Nineteen fifteen was a tumultuous year in the life of Winston Churchill – one which threatened to end his meteoric political career, only months after his fortieth birthday. As Britain struggled with stalemate in the First World War, Churchill was blamed for the disastrous failure of the Dardanelles campaign and lost the coveted post of First Lord of the Admiralty. He was soon forced out of government altogether and in near disgrace and deeply discouraged, volunteered to serve on the frontlines in France. His wife Clementine later said, “I thought he would die of grief.”

But then, in Churchill’s words, “the muse of painting came to my rescue.” A chance encounter encouraged him to take up painting and the result was a passion that would sustain him for the rest of his life. He studied – and learned from - masters such as Monet and Cezanne and took lessons from leading British artists. For the next forty years, painting became his solace in times of struggle and a respite from the incredible demands of leading Britain and the world during one of history’s greatest crises.

Churchill created over five hundred pictures with a particular fondness for plein air landscapes at locations from the English countryside to the French Riviera and in cities as diverse and Marrakech, Venice and Miami Beach. Today, fifty-seven years after his death, his work is coveted around the world - one of his most iconic pictures recently sold for $11.5 million, surely a record for a “non-professional” artist.

Join acclaimed historian and popular Community Library speaker Lee Pollock as he tells the story of Winston Churchill’s romance with canvas, paint and brush and the all-important role that painting played in his life.
“Happy are the painters for they shall not be lonely. Light and color, peace and hope will keep them company to the end of their days.” - Winston Churchill, December 1921

Seating is limited, so please register to save your seat. Lee's presentation will also be livestreamed on the Library's Vimeo and available for later viewing. Click here to watch online.