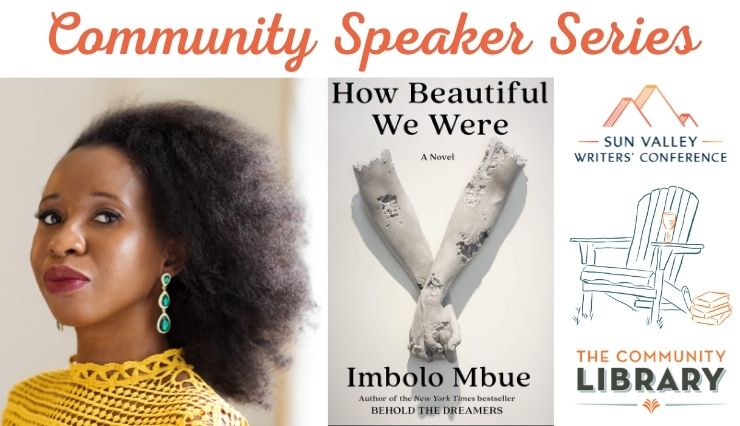 "How Beautiful We Were" with Imbolo Mbue In-Person

The 2022 Community Speaker Series presented by The Community Library and the Sun Valley Writers’ Conference welcomes award-winning author, Imbolo Mbue. Mbue will be in conversation with the Library's director, Jenny Emery Davidson.

Many years before she published her award-winning debut novel, Behold the Dreamers, Imbolo Mbue was working on another story, which she set aside. We now have that book—named “one of the best of 2021” by The New York Times—a stirring, heartbreaking story about a small African village engaged in a struggle with the American oil company that is poisoning its land and its children. Nuanced and character-driven, How Beautiful We Were has moments of eruptive violence and scenes of stunning beauty. Mbue will talk about how the story haunted her, how she came back to it, and why writing novels is her life’s work.

This free event will be outdoors in Ketchum's Forest Service Park. Bring your camp chairs, blankets, picnics, and join us! No registration is required. The conversation will be livestreamed and available to view later. Click here to watch online.

Imbolo Mbue is the author of the New York Times bestseller Behold the Dreamers, and the recently published How Beautiful We Were. Behold the Dreamers won the PEN/Faulkner Award for Fiction and the Blue Metropolis Words to Change Prize and was an Oprah’s Book Club selection. Named a notable book of the year by The New York Times and The Washington Post and a best book of the year by close to a dozen publications, the novel has been translated into eleven languages, adapted into an opera and a stage play, and optioned for a movie. A native of Limbe, Cameroon, and a graduate of Rutgers and Columbia Universities, Mbue lives in New York City.