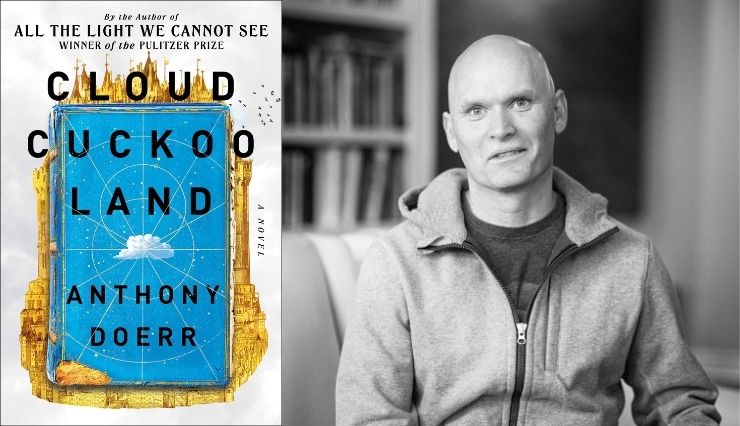 A recording of this program was available for one week only.

Pulitzer Prize-winning author Anthony Doerr joins us to discuss his new book, Cloud Cuckoo Land, which was shortlisted for the National Book Award.

Registration is required to attend, and space is limited. Proof of vaccination and masks are required for this event. UPDATE: REGISTRATION IS FULL.

The program will also be live streamed, but will only be available for live viewing. Click above to join us online.

Chapter One Bookstore will be on site selling books, but there will not be a book signing following the event in respect of the author's health and safety.

Five protagonists dwell in the heart of Cloud Cuckoo Land: Anna and Omeir, on opposite sides of the city walls during the 1453 siege of Constantinople; teenage idealist Seymour and octogenarian Zeno in an attack on a public library in present-day Idaho; and Konstance, on an interstellar ship bound for an exoplanet, decades from now. They are all dreamers and outsiders who find resourcefulness and hope in the midst of peril. A book written in ancient Greek—the story of Aethon, who longs to be turned into a bird so that he can fly to a utopian paradise in the sky—provides solace and mystery to these unforgettable characters.

Doerr’s dazzling imagination transports us to worlds so dramatic and immersive that we forget, for a time, our own. He has created a tapestry of times and places that reflects our vast interconnectedness—with other species, with each other, with those who lived before us, and those who will be here after we’re gone.

Dedicated to “the librarians then, now, and in the years to come,” Cloud Cuckoo Land is a paean to the extraordinary human capacity to transmit stories from generation to generation and a novel about stewardship—of books, of our shared planet, and of the human heart.

Anthony Doerr was born and raised in Cleveland, Ohio. He is the author of the story collections The Shell Collector and Memory Wall, the memoir Four Seasons in Rome, and the novels About Grace and All the Light We Cannot See, which was awarded the 2015 Pulitzer Prize for fiction and the 2015 Andrew Carnegie Medal for Excellence in Fiction.

Doerr’s short stories and essays have won five O. Henry Prizes and been anthologized in The Best American Short Stories, New American Stories, The Best American Essays, The Scribner Anthology of Contemporary Fiction, and many other places. His work has been translated into over forty different languages and won the Rome Prize, the New York Public Library’s Young Lions Award, a Guggenheim Fellowship, an NEA Fellowship, four Pushcart Prizes, and the 2010 Story Prize, among many others. Doerr lives in Boise, Idaho with his wife and two sons.